The new 5-nanometer camera system on chip (SoC) is the latest in the company’s CVflow family, and it consumes under 2 watts of power. The chip is about 4 times more powerful than the previous-generation chip. 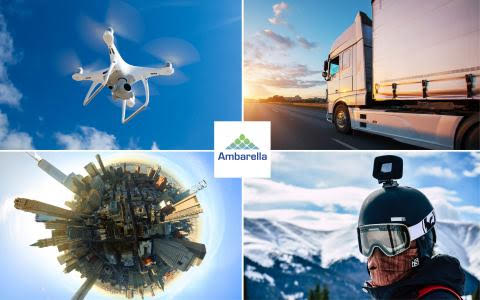 Chris Day, VP of marketing and business development at Ambarella, said in an interview that the chip can record 8K video or four 4K video streams. Samples will be available in the second quarter, and products using the chips may be out in 2022.

The chip will enable the development of intelligent automotive camera systems, consumer cameras (drone, action, and 360°), and robotic cameras. The company made the announcement as part of the CES 2021 digital trade show this week.

The chip combines Ambarella’s CVflow AI engine with dual Arm A76 CPUs to provide the performance necessary for a wide range of AI-based algorithms. Its advanced image signal processor (ISP) can simultaneously process 8K images at 30 frames per second for both human viewing and machine processing.

“In sports cameras, power consumption is critical because of the compact form factor, and they run out of batteries,” Ambarella senior marketing director Senya Pertsel said in an interview with VentureBeat. “In particular, we emphasize HDR improvements for challenging lighting scenarios, as well as on-chip image stabilization for sports cameras.”

The chip is made in a 5-nanometer process technology, where the width between circuits is five billionths of a meter. That technology enables Ambarella to achieve a combination of high performance and low power consumption. 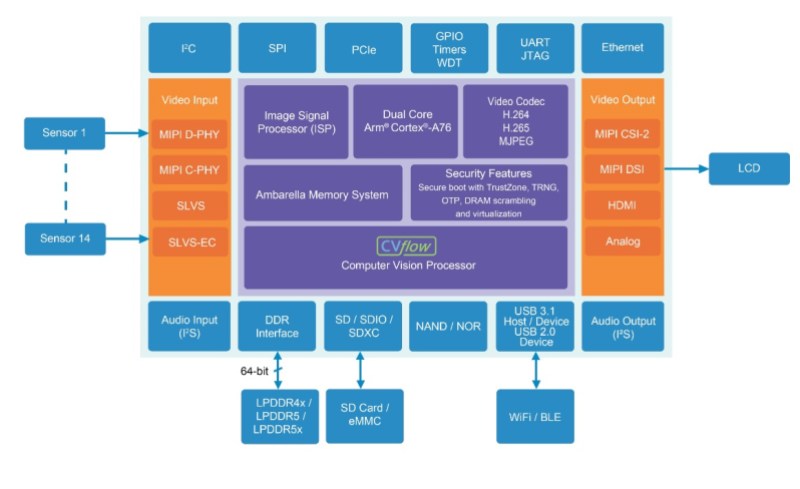 Above: The diagram of the CV5 chip.

“Five nanometers is very much the leading edge of technology,” Day said.

“CV28M was the baby of the family for low-cost sensing cameras,” Day said. “And CV5 is the other extreme as our highest video performance chip. We’ve been cranking out different chips with different AI capabilities.”

“The [8K] performance is already useful. First, there is a balance between resolution and frames per second with the maximum dictated by this performance so even if the application does not make use of 8k, the additional resource can be applied to increase the FPS, which is commonly useful,” Yole Développement semiconductor analyst Tom Hackenberg said in an email to VentureBeat. “Second, while we might view 8K as overkill for visual displays in embedded applications, the additional data may allow for greater accuracy when inferencing the content of the video.”

The CVflow AI engine can simultaneously run advanced driver assistance systems (ADAS) algorithms, such as whether the driver is drowsy or is veering out of a lane.

The combination of high-resolution video capture with advanced AI processing enables ADAS cameras to recognize images over long distances and with high accuracy.

For drone-based aerial videography and cinematography, CV5 can simultaneously perform flight control and navigation functions while recording up to 8K resolution video recording at 60 frames per second.

“We think multi-camera systems will be one of the key applications, like having lots of cameras on a semi-truck,” Pertsel said. 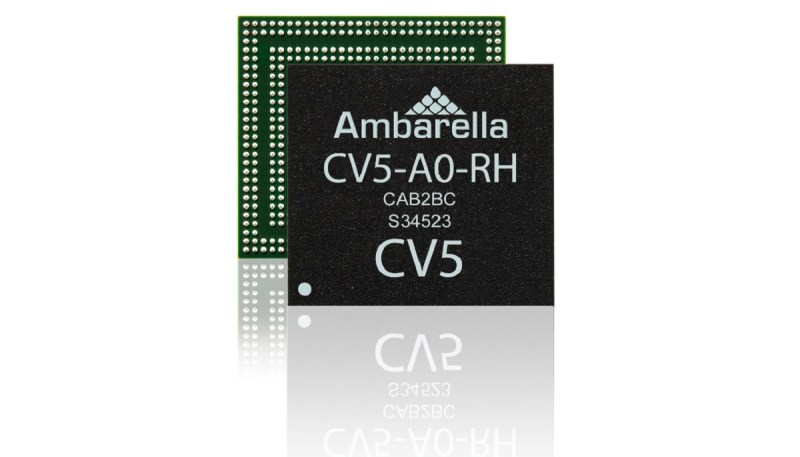 Above: Ambarella CV5 chips will be used in products in 2022.

I asked if it was overkill to have an 8K video of someone perhaps falling asleep in a car. Udit Budhia, director of marketing at Ambarella, said in an interview that semi-truck monitoring might need such image processing power because it would have so many cameras keeping track of different parts of the truck, including the part where a camera monitors whether a driver is drowsy. All of that could add up to requiring 8K processing.

The Santa Clara, California-based company, which went public in 2012, started out making low-power chips for video cameras. But it parlayed that capability into computer vision expertise and in 2018 launched its CVflow architecture to create low-power artificial intelligence chips. Now the company has 800 employees and is competing with the likes of Intel and Nvidia, though with a focus on low-power applications. Ambarella generated $220 million in revenue in 2019.