This post was originally published by Chris Sloley of CityWire Selector

That may be an oversimplification but the fast-food giant outlined plans at the end of 2020 which could feasibly see customers order and pay for food on the official app, drive to one of its restaurants and collect their meal from a heated locker.

In doing this they wouldn’t meet a single human being in the process.

The click-and-collect model is not designed to keep you at arms-length but bring you just close enough to allow for the holy grail of short-order service – the upsell. This is where the company positions itself to sell you more products based on what they think you would want.

This push to add lockers, app-based ordering and even conveyor-belt delivery, fits within what Burger King’s parent company, Restaurant Brands International, called ‘the restaurant of tomorrow’, according to a Business Insider report from October 2020.

It is not alone in trying to redefine the way people interact with fast food.

McDonald’s, the market leader in the QSR (quick-service restaurant) space, kick-started this arms race by delving into the world of AI and machine-learning. It took this route via its purchases of decision-technology specialist Dynamic Yield in March 2019 and voice technology group Apprente in September the same year.

Jeneiv Shah, who co-runs the Sarasin Food & Agriculture Opportunities fund with Henry Boucher, said McDonald’s stole a march on some of its peers by recognizing the potential of using its drive-thru infrastructure, which came into its own as pandemic restrictions limited access to physical restaurants.

‘McDonald’s purchased Apprente as part of its push to increase and improve the drive-thru experience, which has become an increasingly larger part of the McDonald’s revenue stream. That has been really bolstered during the pandemic, as many sites are now drive-thru only.’

Shah, who has no exposure to McDonald’s in his fund, said this has implications for the wider fast-food market, as targeting the drive-thru aspect of food delivery is homing in on a very important aspect of what makes fast food key: speed and ease.

‘The main thing is to ensure the process is smooth and that people are not tempted to leave when they see a big queue and go to a competitor. The aim is to cut 30 seconds off any single person’s waiting time. That may not sound like much but if you aggregate that out over thousands of customers at every outlet every day then that is a big saving,’ said Shah.

This is a pinch point for the owners of the Golden Arches. According to a report by sector-specific trade magazine QSR, McDonald’s saw waiting times increase gradually over the five years between 2014 and 2019, the latest available dates, to sit at an average of around four minutes. This is partly due to increasingly complex menus and popularity, which leads to more cars in the queue.

Shah said this is where Dynamic Yield comes into effect. ‘This syncs with the voice technology offered by Apprente, which lowers waiting times and reduces staff levels, because when someone is saying what they want to have, the Dynamic Yield technology will suggest different combinations or additions.

‘There are only so many combinations of orders, but the technology will guide customers towards additional purchases but is conscious of the speed of delivery,’ he added. 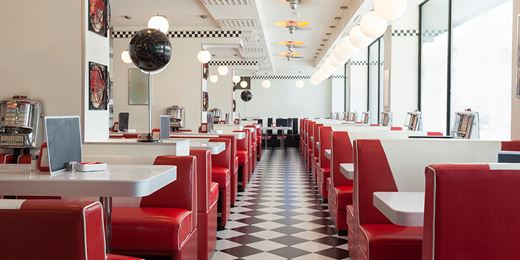 Tjeerd van Cappelle, head of automated intelligence equity investing at NN Investment Partners, is also aware of the ongoing arms race in the fast-food sector. He picked up Shah’s point regarding speed-of-delivery and that the experience has become more intuitive for customers.

‘Drive-thrus is obviously an area that is being invested in heavily, as they can develop a network which maximizes the experience of the user and increases revenues. One of the aims is to intelligently push the additional purchases and generate more sales that way. It is direct and much more effective than sending offers to your email that may get redirected to your spam filter.’

Van Cappelle also highlighted the use of ANPR technology, which stands for automatic number plate recognition. This is mostly used by traffic police to quickly identify vehicles, but van Cappelle said there are applications in the world of fast food, as well.

‘We are seeing developments in areas such as license plate recognition that can recognize existing customers but also recognize customer profiles based on their vehicle. For example, there would be some sort of profile built around the average Ford driver, let’s say, which would be added to the time of day that vehicle enters the premises. It all adds up to allow for a more targeted offering.’

Shah added this can benefit both the customer and those preparing the food. ‘The use of ANPR technology can also help with this, as it can recognize license plates, work out what that driver is most likely going to want, when, based on what they have had previously. It changes the suggestions on the screen and also prepares the kitchen.’

Van Cappelle has held pizza firm Papa John’s and restaurant group Yum Brands in the NN (L) Food & Beverages fund, which he co-runs with Jeff Meys and Anastasia Naymushina. He said the trend for the industry will continue to become more technology-led, as companies seek to gain a competitive advantage.

‘There is obviously an uptake among these types of companies to increase their technology, as it simply allows them to sell more targeted material. This allows them to improve their margins and revenues considerably.

‘If you go back 30 or 40 years, Domino’s pioneered a toll-free number and that tech has now advanced considerably to reshape sales volumes by offering more of what people want, not what the company has.’

Shah added that a greater emphasis on tech doesn’t also improve things on the customer side but can be used to address aspects such as food waste, which eat into margins.

‘By suggesting what clients might actually want rather than what you have in stock, that cuts down on oversupplying and food spoiling. This is where the technology can help in the background as well as in the client-facing aspect. This increases efficiency by providing a better service.’

This will be matched by other shifts that will rely more heavily on technology, Shah added. For example, the number of cashless payments was rising even before the Covid-19 pandemic increased use, while traditional restaurants are beginning to mimic the widespread use of touchscreen technology, which has become a staple of McDonald’s restaurants.

Van Cappelle added: ‘The use of touch screens has become more prevalent and more intuitive as they are based on combinations of orders. There are x number of combinations of orders that can be thrown up and it can be tailored to the person at the screen. The technology learns from experience which offers sell best. This is the complete opposite to what you expect from a Michelin-starred restaurant.’

This post was originally published by Chris Sloley of CityWire Selector